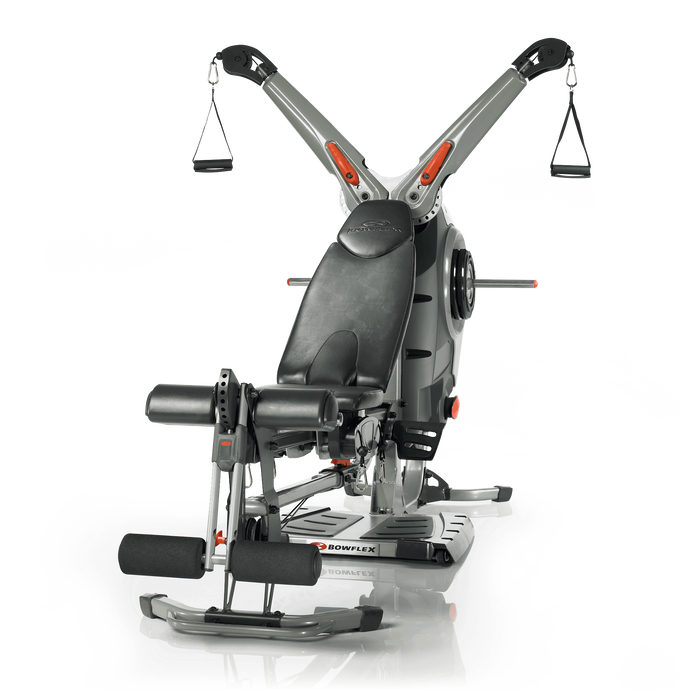 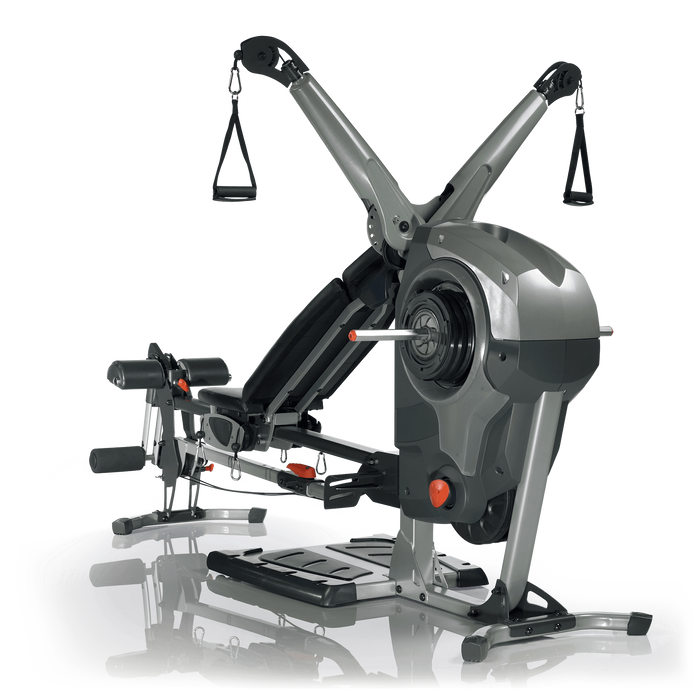 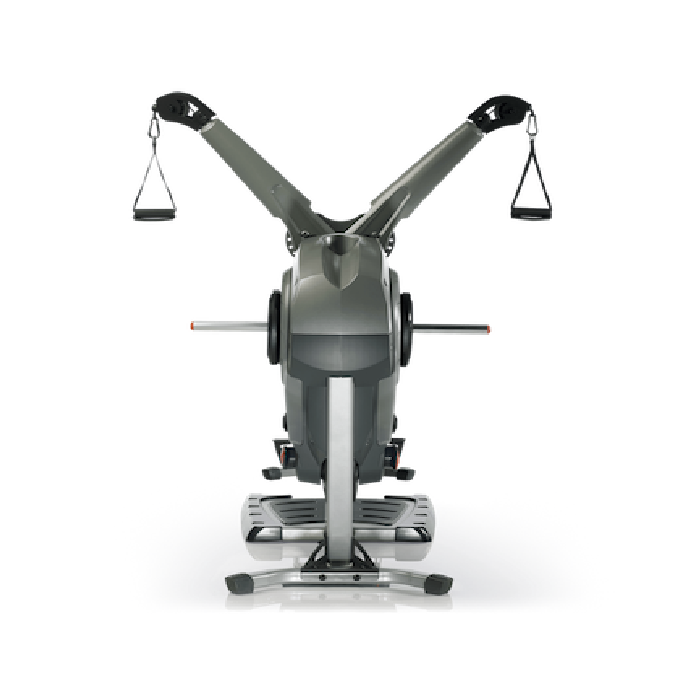 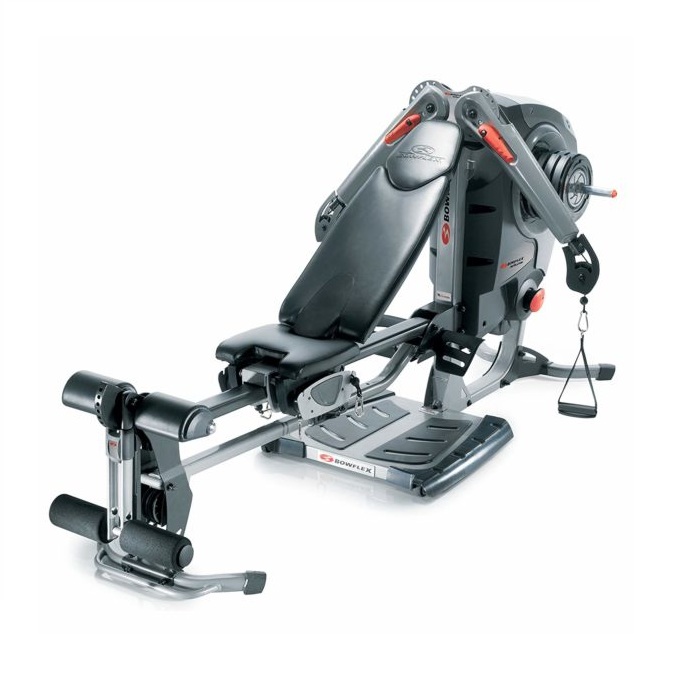 Bowflex has been producing home gyms since the mid-1980s and most of us are familiar with their patented power rod technology. However, with the Bowflex Revolution, they have introduced a new resistance technology, which they have called SpiraFlex. The Revolution is Bowflex’s top of the line home gym. It is a heavy-duty model that boasts in excess of 100 exercises and a max resistance of 200 pounds, which includes an 80-pound upgrade.

In this article, we provide you with an in-depth review of the Bowflex Revolution.

Works for both the upper and lower body

Quite large and weighs 300 pounds, making for a difficult assembly

Bowflex has always been innovators when it comes to resistance weight training. However, with the Revolution, they have moved beyond the traditional weights, cables, and rods that you may be used to. For this one, they have leaned on the technology that is used on the International Space Station. When the astronauts in the space station attempted to work out with traditional free weights in order to combat the losses of bone and muscle mass that occur in a weightless environment, the lack of gravity made it impossible. That is what set NASA technologists to work on something that would work. The result is how the SpiraFlex system that we see on the Bowflex Revolution originated.

The Spiraflex technology revolves around cleverly designed plates, each of which is constructed with a heavy-duty elastic strap housed inside the plate. When you perform an exercise, the Spiraflex plates rotate around the center. This stretches the elastic strap and creates resistance. The plates combine with a mechanism inside the machine to create constant resistance throughout the entire range of motion. The result is a more consistent gym-quality experience. The Spiraflex plates look a lot like free weight plates. They are assigned a pound rating based on their resistance as follows: 5, 10, 20, and finally 40 pounds.

The great thing about the plates is that, even though they differ in created resistance, they all weigh about the same, which is just a few pounds. That means that the real power of the workout is in the resistance, not the weight plate. This makes it so much quicker and easier to stack these lightweight plates onto the Revolution home gym and get a great workout. The lightweights of the plates also make them a whole lot safer to use than traditional free weights. The original Bowflex Revolution provides you with 220 pounds of resistance. The XP Home Gym comes standard with 200 pounds of resistance. There is also an 80-pound upgrade available for each machine. A major advantage of the Spiraflex resistance packs (that’s what they call the weight plates) is that it provides resistance through the entire range of motion. The result is a more consistent training experience and greater time under tension. This allows for a greater burn, a better workout, and faster results. Because no metal parts are used in the Spiraflex technology system, there is a reduced likelihood of parts breaking down.

The majority of full-body home gyms do a pretty good job of working the muscles of your upper body. However, they generally fail when it comes to the lower body. That is not the case with the Bowflex Revolution. The Revolution provides you with some serious leg training options.

The Revolution comes with a high-quality leg press station. It also provides you with a weighted harness set up so that you can simulate a heavy squat workout.​ The Bowflex Revolution provides you with a far greater exercise range than you find in most home gyms. There are a large number of configurations that allow for differing angles to be able to work your muscles, including the flat, incline and decline bench. It also includes a preacher bench attachment so that you can do targeted bicep work. The independently moving arms allow for 10 position adjustments over a 170-degree range of movement. A leg extension attachment, as well as a leg press, allows you to hit your quads.

Within the 100 exercises available on the Bowflex Revolution are more than 400 variations. In addition, you are able to switch quickly between hundreds of exercises with less set-up time than most gym machines. The result is that your workout time is shortened while at the same time it allows you to keep your heart rate up to burn more calories.​ Changing between exercises on the Bowflex Revolution is simple. The free arms rotate between 0 and 9, with 0 being straight up and 9 being straight down. That provides you with ten arm positions to work out with. Each of these positions provides you with a slightly different variation of each exercise. To change the cables between exercises you simply adjust the snap hook attachments.

The Bowflex Revolution provides you with a number of accessories units to extend your exercise options. These are:​ Leg Press Plate, Leg Press Seat Back, Preacher Curl Assembly, Resistance packs, Handgrips & Foot Harnesses. This is more than enough to keep most people busy for a long time! But if you are an experienced lifter, you probably won’t get enough resistance for exercises like the leg press. You will also find the preacher curl set up to be quite awkward and not to feel natural. To set up the preacher curl you have to attach a curl bar to the leg extension attachment. This does not provide you with a full range of motion, making the exercise pretty ineffective.

The fully assembled weight of the Bowflex Revolution is 300 pounds. That makes for a heavy piece of home training equipment. It's also recommended that you place the machine on good gym floors, or on a mat because it can damage your floors easily. The machine is fitted with wheels for ease of transport. It also folds down to a compact size to allow you to easily store the unit away when not in use.

The biggest problem that users have experienced with the Bowflex Revolution is that it is not designed for larger people. If you are around 6’3” or taller, you will find that you are just a little too large for the machine, making it uncomfortable to do such exercises as lat pulldowns. On leg extensions, you will not be able to get enough extension to press to a full range of motion.

Let's face the truth here - the Bowflex Revolution is one of the priciest machines out there, and it would take a lot of time-saving up to buy it. It is about twice the price of what you would pay for the majority of the competitor models that are on the current market. With that being said though, the machine really is quite versatile. The cost also goes up thanks to the unique technology they used to create a challenge for you. The machine is also quite durable, so you'll get to use it a lot, which makes the cost a little bit easier to understand, but the machine is still out of reach for many people!

The Bowflex Revolution is an exceptionally durable piece of equipment. This is mostly because it has almost no metal parts, making the likelihood of the machine chipping, rusting, or breaking, very small. The Revolution also comes with a 10-year warranty, which is much more than what some machines come with, although a lifetime warranty would be ideal here considering the cost of the machine!

Truth be told, The Revolution is a very heavy machine, and it may be a bit difficult to assemble. Although you're only putting the main parts together, it can still be quite a challenge, An instructions manual comes with the machine, which is very well written, with many details and explanations due to its weight and size. If you lack strength, or if you're just not familiar with this type of work, chances are that you will need help from one, or maybe even two, people.

Comfort is quite an important detail when it comes to home gyms. Although it's often overlooked, you really do need a cushy spot to sit down on when you lift weights, because otherwise, you might not want to do it at all, blaming the machine for saddle sores and aching backs. The Revolution is actually quite a comfortable machine. Previous machines had issues with comfort, with people reporting thin cushions that lose that little bit of comfort they had quite quickly. The seat and back area were particularly problematic, and those two areas are the most important bits! Bowflex addressed these issues, and the Revolution has a wider seat area, despite the fact that the whole machine is slimmer than the previous models. This makes working out on the machine a joy and gives you the chance to use your full range of motion, opening up more exercise options.

Although the Revolution appears to be a complicated machine, it's actually quite easy to use. And even if you do find yourself struggling, you shouldn't worry all that much because they include a detailed manual which shows you how to use the machine the best way possible. The manual is clearly-written, and it includes plenty of exercises that you can try out. Thanks to the smoothness of the machine, made possible by the SpiraFlex Technology, you won't struggle that much to use it, and every motion will be intuitive and guided by The Revolution Sliding Rail System, present on their previous models as well.

The Bowflex Revolution has introduced an innovative new form of exercise resistance that provides you with a quicker, smoother and more natural workout feel than the power rods that have been traditionally used on Bowflex home gyms. It provides you with an impressive range of exercises and is a well built, sturdy machine. The unique SpiralFlex technology really makes the Revolution worth your time and makes the machine an amazing experience. The cushions and padding on the machine are wide enough and quite comfy, a few issues previous models had that have been addressed. The Revolution is also quite durable, simply because it doesn't have a lot of metal parts. A 10-year warranty promises that you'll get a lot out of the machine. It has plenty of accessories, like a preacher curl attachment, a leg press, leg curl attachments, and much more, that give variety to your exercises.

However, when you take the price, and the fact that it is not really designed for larger people into account, we feel that the Total Gym FIT is a better overall option. The Total Gym offers around 85 exercises and can be used by exercisers of all shapes and sizes. It is also a lot lighter and can be folded away for storage. With the new weight bar attachment, you can also add weight plate resistance for a more advanced workout. 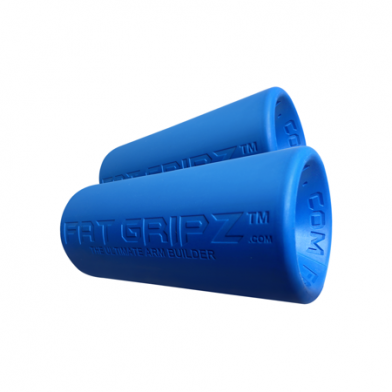 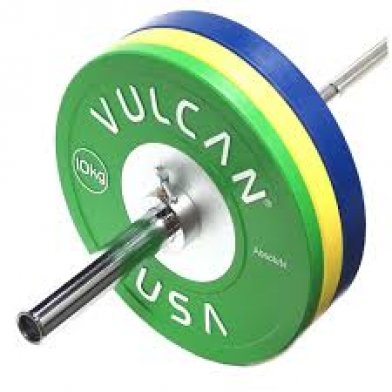